The last couple of months or so have been fairly hectic with plenty going on to keep me busy so it has been nice to spend a couple of days over the Christmas period resting and relaxing with family. That said, I did seem to find myself sneaking out on at least three different occasions just to keep things ticking over.

Rendezvous III was a huge success and everyone involved enjoyed the weekend, despite the British weather throwing its worst at us on the Saturday. The Sunday was a much easier affair in comparison but with a healthy dose of hard work to remind us all that the weekend wasn't over yet. My thanks to Chris and Thomas for the accommodation and everyone involved in the careful planning of the event that ensured the large number of attendees were kept safe, had fun and hopefully learned a few things to go home with and integrate in to their training. You can read a more detailed report about the weekend's events here.

The weekend before the third Rendezvous I had travelled to Lisses on a whim, with a couple of friends just to get away and return to where it all started. It was a whirlwind weekend and there was barely enough time to settle down before it was time to leave again but it was great to meet up with Gouda, Kaz and Cisco, as always. It's a real pleasure to know you can travel hundreds of miles to a foreign country and instantly have something in common with someone that defeats any language barriers there might be. It was my fourth visit to Lisses and passed by far too quickly, but I don't doubt I'll be back soon... there's certainly something special in the air there that leaves you with a renewed energy to feed from when you return home, and this trip was no exception. 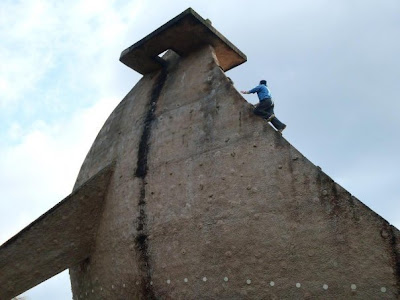 Training over the past few days has been great. I've been making the most of the difficult Winter conditions and using them to my advantage.

On Friday I trained with my friend Joe in the night and it was freezing, with ice covering everything that didn't move - and even most of what did move. We proceeded with great care and repeated simple jumps that were suddenly not so simple knowing that anything less than a perfect landing was asking for trouble.
One particular standing arm jump we had found was teasing me and I was battling with myself trying to decide whether I should do it now or come back when it was light, dry and when ice wasn't an issue. It was high enough to make the thought of missing unpleasant and the take off had a damp, icy feel to it underfoot, with patches of moss not helping matters. The landing roof was in line with my knees some 11ft or so away and after I'd checked that out I realised it was difficult enough to walk on nevermind catch from a jump! I had to do it. I knew it would be simple in better conditions, so the real challenge was doing it right now when things couldn't get much worse. I made sure my technique was as textbook as possible and got plenty of height to give my hands time to spot the landing and adjust to any last minute patches of ice that jumped out to greet me.
All went well enough and although my foot placement wasn't perfect, since I had expected them to slide much more than they did, I was quite pleased. I had more confidence for the next two repetitions which I used to improve the landing before we moved on and continued our careful training around the eerily quiet, ghost-like town on a grim boxing day's eve.

The next night I had another opportunity to take advantage of difficult conditions. Joe had mentioned a particular arm jump on a rooftop that we had both done before but he warned me that it was a whole different story at night and he was right! What had been a relatively simple jump in the daylight when we had done it together months before was now one of the most intimidating things I've seen in a long time.
The jump is a fair size but the wall where your feet land is set back about a foot from where your arms need to grab and although you could see the wall without too much trouble, the roof where your arms were supposed to grab was pitch black, and impossible to pick out from the darkness behind it. With some lights on the ground to your right that killed any potential night-adjusted vision you could hope to develop, this was not going to get any easier.
After another mental battle and dragging out all of the old motivations and reasons why I had to do this now, rather than later, I forced myself to just focus on having the best take off possible to give me plenty of time to find the roof when I reached it. When I reached the roof I realised it wasn't any easier to spot the landing but I had remembered how the jump had felt in the day time and based my hand position on that, found my hands connecting with something and held on like my life depended on it. It didn't - missing would simply have meant doing your best to land on a dark roof somewhere a few feet below but the thought of hurling myself in to complete darkness and relying solely on memory made me all the more inclined to hold on and treat this as a 'do or die' moment. Repetitions two and three were as always, much easier and I could approach them with more confidence after the first had filled me with a rush of adrenaline and had my heart beating like an angry drum.

So yes, I hope you're all making the most of Winter and not limiting yourselves to gyms or indoor training... now is an ideal time to get out there and really push your boundaries and limits, especially your mental side. Take extra care in difficult conditions and work with smaller, simpler jumps, you will find that they are suddenly much more challenging when you add factors such as limited light, ice, rain, fog, damp, cold and anything else you might meet at this time of year.

Grat text, it motivates me to go out an train hard. Thank you.

Nice stuff Blane, I've been doing exactly that! We've been getting snow/rain daily, with temperatures averaging around 25-30...with my ankle healing up, I've been focusing on prolonged periods of rail quadripedie in the snow and rain, as well as climbing random things around me...a bit more difficult when the metal is not only ice cold but slippery as hell too xD

yes.. i've found it helpful for me too nearly 2-3 weeks ago... such trainings are both intresting, useful an' effective, i think. i don't appiciate gym trainings too much, and i'm on the side of outdoor trainings without dependence from weather and its factors, as "limited light, ice, rain, fog, damp, cold" etc.

As for myself, such trainings increased my jumping capacities. Being in a "heavy" clothes (in warm clothes))), i tryed to jump as far, as i could + a lot of repetitions of such jumps made me able to jump longer...

of course, you have to be careful during such trainings because of sush extra conditions...

Great reading. I hope you have had a great new years eve aswell!

And I totally agree like the others. Taking the opportunity to train in extreme conditions is always good. A good enough reason to not do it another time. Just gotta make sure you are extra careful, and capable of doing it tho. Damage risk is high this time a year id wager.

Myself, I try to train as much as possible now as it is icy and cold here in Sweden. Climbing on slippery surfaces, running on ice etc. Use the climat, instead of hiding from it in the gym! :)

Very nice post mate :) I Want to go out and train now :P
Hope you had a good new year cristmas, etc I Hope to train with you one day.
Laters
-Sonny