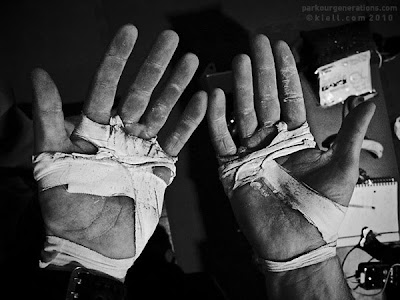 It wasn’t a surprising question to be asked since we ask each other these kinds of things all the time, like “Could you take that drop and walk away?”, or “If this balcony was going to collapse in 10 seconds, what would you do?” and in fact both questions I had answered in the last week.
But even though these questions are always being circulated amongst us and might raise a smile, they’re always deadly serious, and your answer is expected to be also. If the next day that balcony did begin to collapse and you found yourself standing on it, what WOULD you do? That’s the point, to get you thinking and to make you find an answer so that if it happens, well you have the answer already, there’s no more thought needed.
Anyway, after a few minutes I said I’d rather do 1,000 muscle ups and we went back to eating our food in the Brazilian Chinese restaurant… that is, a restaurant in Brazil that serves Chinese food. Then I really began to think about it and we talked it over a little more, estimating the time it might take, how it would compare to the three hundred muscle ups we had done the year before, whether it would be possible or not within 24 hours etc.
Then I said something that I knew might as well be carved in stone, “I’m gonna do it”. I knew I’d have to keep my word, with these guys it’s always the same and if you say you’ll do it then you have to do it. Within fifteen minutes, Dan was in too, and within the hour, Stephane had committed himself, then Bruno. We laughed over dinner at the idea of it but in the backs of our minds we knew we’d just signed up for something we would probably regret.
Although we were bound by PKG law to try and complete the thousand anyway, we wanted a good cause to do it for as we thought we might be able to raise some money for this craziness. It quickly became obvious that we should try to raise more funding for Naoki and his family to cover their hospital fees from the Summer and so our planning was complete.
Six months later and I’m standing in a chilly converted warehouse gym known as OLF, or the Optimal Life Fitness Centre, in East London. I’m excited and glad that we’re about to begin the challenge and as I look around I see nervous smiles, focused eyes, chalked hands, people taping their fingers and everyone making last minute preparations in the area they had chosen to face this beast. Everyone’s plan is slightly different and everyone’s training was slightly different but what is the same for all of us is that we’re staring down the barrel at 1,000 muscle ups each. I think it’s fair to say that 95% of the human population couldn’t execute a single muscle up and here we were, planning on doing 1,000. Each. Our team of four had grown to a team of eight over the months and it was time for us all to get this underway.
The highly anticipated start was a relief in some ways and made me smile not just because I was with my friends facing another crazy challenge but because the big build up only lasted about 10 seconds as we all jumped up and grabbed the bar and did no more than three or four muscle ups each, before dropping down and resting. This was a strategic and tactical move that we’d all seemed to agree on for pacing yourself was going to be the key to completion.
We were on the way and what follows from here is a very one sided account as I have little idea of what went on around me for the next sixteen hours… 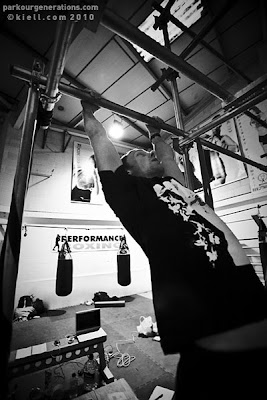 255 muscle ups and 1 hour, 49 minutes.
I’m feeling good, hands are taped, chalked and still in one piece. I briefly think about the 300 challenge which I did quite a while ago and remember it took me 2 hours and 11 minutes last time. Even though this is a very different kind of challenge, I think I’d like to beat that by just a minute or so to improve my time but I don’t want to push myself too much.
300 muscle ups and 2 hours, 9 minutes.
Two minutes faster than last time and I’m still feeling not too bad. I had begun today by doing three muscle ups in a row then dropping and resting a whole minute before doing the same again and repeating the process. It was working well but I was beginning to feel that it wasn’t going to be long before I failed to complete a set of three.
363 muscle ups and I switch to doubles.
I’m over a third of the way and change my pattern to two every minute. A few of the guys had also completed the 300 challenge within the two hour thirty minute time limit and I was happy to take a two minute break to shake their hands and congratulate them.
401 muscle ups and 3 hours, 3 minutes.
It had been building up for a while but so slowly and steadily that I hadn’t really heard my body telling me that I felt a bit sick. Whether it was low blood sugar, plain hunger or just the sustained effort, I needed a break and food. It was worrying to stop because I feared I might seize up, get cold and find it hard to restart but I had to deal with this feeling now or I might not be able to continue at all. 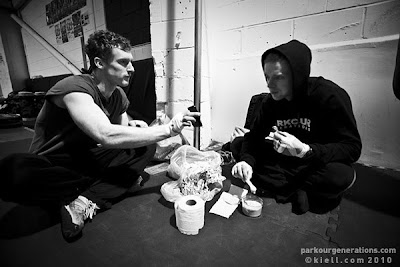 500 muscle ups and 4 hours, 54 minutes.
I’m halfway there and the break had been perfectly timed. I had sat down for 20 minutes, eaten a beef burger that had been grilled at 6am that morning and munched on some biscuits, had some tea, some water, an apple and half a banana. At first I felt cold but the food really helped me to feel better and ward off the sick feeling. Five minutes on the rowing machine had warmed me back up but not tired me out and the time between 400 and 500 went quite quickly. Time, in general, was moving quickly. I couldn’t believe we’d been going for almost five hours already and my original goal of completing the challenge in around ten hours was still on track.
600 muscle ups and 6 hours, 39 minutes.
And there it was. The good times were over, the fun had stopped and everything was not ok. It was far from ok. I had some pain in my elbows as the tendons were becoming inflamed and every repetition was beginning to hurt. Shirley and Andy had taped, and re-taped my hands countless times and I was resting more and more between sets. It was time to be honest with myself. 600 sounds like a lot and on any other day it would be, but when you’re left with 400 muscle ups, you are far from done. This is where the line was drawn and it was becoming obvious which techniques worked best, whose training methods had been most effective for this challenge and just how much we wanted to finish this.
I decided that if the pain got much worse, then I would think about stopping but right now I was going to keep going, one muscle up at a time, and one minute at a time. 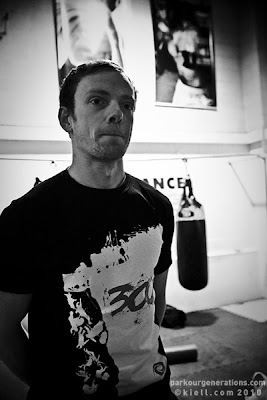 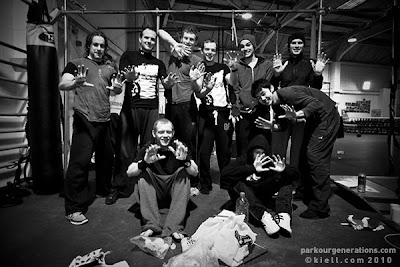 This is hilarious. You are my inspiration, Cris.
Greetings from Lviv, Ukraine.

it's really amazing ! some day i'll try it too !

I am impressed.
Thank you for sharing this experience and inspiriing my training.
Love to you all from Germany !

You know what Warrior means, right? If you don't, then just feel it, man.

Time for the ultramarathons!
How much did you end up raising?

much respect blane!!!
As always great stories with great writing. I won´t lie to you, my hands were sweating as I read but the best of all is that I remembered Morzine times, and the 300 muscle up challenge did days before yours ( my time consumed at 272...) but the feeling was the same, how to stop if I had time left!! do a muscle up until the time ends!!

Great write up, really heartwarming. I just wish more people would give through movement.

Great text Blane!
Thanks for sharing...
And again, congratulations to all of you guys!

May the flow be with all, specially Naoki.

This is fantastic, Blane. I've been running an ultramarathon every year for my birthday (I'm 46 now) for two years-- 45 miles last year, 46 miles this year. I really can relate to the feeling you experienced towards the end. And the extreme feeling of gratitude for every bit of help.

Maybe next year I'll do pushups or muscle-ups instead! Thanks for doing this, I've sent a little gratitude to your cause.

This is incredible! Thanks for this post and being such an inspiration for my training, as well as for other things in life.
Love & Greetings from D.C.

out of words after reading it.
thanks for sharing,
you and all your friends are such an inspiration to all of us in Indonesia.
:D

This post is very inspiring.
While I was reading it, it seamed that I was there with you and the others even if I think it's impossible to imagine what you proved that day.

haha this was so exciting man!! Just have to say you guys are crazy. Very well done.

Wow, that's an incredible achievement. I just found your blog and well, it's amazing.
Such an inspiration!
Aedryan

Wow, this is the most interesting blog and post I have read and came across!

This is indeed inspiring. You are also a pretty good writer. I can sense your pain and determination in your words. That determination and will power will go along way in other aspects of your life.