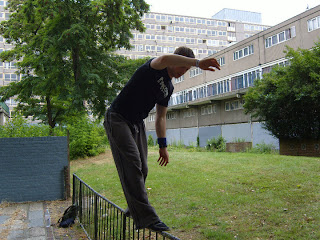 It was a year ago at the Christmas party and the day after the 1,000 muscle ups challenge.

I was so tired and sore that the never ending stream of amazing food arriving in front of us just tasted like bland toast. And besides, I had almost no appetite.

We were joking around about the next big challenge and how we could better this one. Unsurprisingly, everyone liked Stephane's idea of making it more of a technical or mental challenge, rather than a physical one... and his idea was 1 mile of rail balance without touching the ground. And if you did happen to touch the ground, then you had to start again.

It was one of those mysteries where you're not sure whether it's going to be next to impossible, or not too bad.

Either way, we quickly realised one of the biggest problems was going to be finding a long enough rail!

It was new year's eve 2011 and a few of us met up for some training to end the year. Still a bit tight from the 300 muscle ups just two days earlier, I decided to have a light day and just work on some short routes, basic techniques and balance work.

We were at Earlsfield and moved on to a nearby training spot towards Tooting Bec when someone remembered there's a low rail there that might do the job. It was indeed a good length, and more importantly, unbroken, to form a large sweeping circular shape with a few L-shaped corners thrown in to fit the shape of the grass.

We talked a bit about the challenge and agreed it would be a suitable place. The rail was slightly thicker than the average hand rail but that advantage was balanced out by the fact that it was very low to the ground, so if you should wobble then you had no hope of dropping to a hang to stay off the ground.

Andy measured it out and it was about 120 metres in total. Andy, Kush and I then walked a complete circuit to see how it felt and it wasn't that bad. Sure, it took a bit of concentration but there was no pressure and we all made it around.

It wasn't until 4 or 5 circuits later that I decided it was a pretty good rail for the challenge and maybe I should just keep walking and see how far I get... It'll be good practice for the mile.

How many times would we need to complete the circuit to hit a mile anyway? We were spaced out along the rail and Fizz, Leon and Joe had all joined in on our little experiment so there were quite a few of us now, and Dan was playing around with the idea of doing a circuit on all fours.

We worked out as we walked that it would take somewhere between 13 and 14 circuits to make a mile, and on we went.

After about 6 lengths, Kush wobbled a bit and tried to correct himself by speeding up, which took him off the rail. He stepped off, and knowing he wouldn't have time before work to start again and complete the 13, he decided to leave it until another day.

Joe fell off at some point and decided to carry on from that point and finish 13 lengths in total.

Leon fell off a little later.

Andy, Fizz and I were still going but Fizz had arrived a bit later so she was 5-6 circuits behind us.

I was at 10 when I remember thinking that I didn't want to fall off now and wanted to tick off the mile today - challenge number 3 of the week.

Being a bit of a weirdo, I decided I'd try for 15 since it was a nice round number and would guarantee that I was over the mile mark.

I was half way around the long sweeping half of the course, on my 13th circuit when I wobbled. It was an almighty wobble and I seized up so tight that I got a cramp in my hamstring trying to fight for stability... Somehow I corrected it and after a few cautious steps I was back in the rhythm of putting one foot in front of the other, albeit with a bit more apprehension than before.

There are two things that you quickly notice after any long period of time spent balancing on a rail. The first is that it's quite a good workout for the shoulders, as you constantly use the arms to balance.
The second is that looking down and focusing on a bar as you walk forwards makes the background lose focus and move at a different speed, so your vision goes a bit strange and when you stop and look around you, the world is made up of moving waves. It's cool, but also a bit inconvenient when you need all of your senses at high alert for such a long period of time.

At 3 different sections around the circuit there was an L-shaped corner where you could distribute your weight evenly between two directions on the rail and 'rest'. People would tend to get to one of these, take a few seconds to stretch the shoulders out, shake the legs and take a few deep breaths, before moving on to the next identical checkpoint.

I was at the second L-shaped corner piece on the 15th length and it was getting dark now. I knew I'd probably be fine since I was almost finished but Fizz was going to be finishing her last few laps in darkness.

When I reached the end of the 15th, I balanced a little further and cat leaped to a nearby wall, climbed up and relaxed a bit to wait for Andy who was a little behind me. He finished it without much trouble.

The mile was done in around an hour and twenty minutes or so, and although it wasn't easy, it was easier than we expected it to be and a lot easier than the previous two challenges of the week.

Fizz was doing great but wobbled, and fell off on her 12th or 13th circuit... We were all gutted for her since she had worked so hard for it and deserved to finish. She vowed to come back and conquer it soon.

A few of us headed for food and a few others stayed. We met up later to learn that Joe had finished his 13 laps and Leon had started again and done the whole mile off the ground without falling, after getting half way there in a previous attempt - awesome.

It was a great end to the year, but as I mentioned in the previous post, I'm going to take a break from these long haul challenges and focus on some other goals....

It's time to get stronger, faster and more powerful.

nice, i love balance work. last year i balanced 50 rounds a 25 metres next to my place on a regular basis. sometimes i fell of like 5 times, sometimes like 3 times and a couple of times only 1 time.
once i did all rounds without falling of at all.
in my opinion balnce is great for several reasons:
1)you can do it on "off"-days, as a warmup for stretching or after stretching,
2)it improves your precisions alot,
3)it's fun,
4)you progress fast.

And that one lap of quadrupedie sucked! :)

Yo!
Good to see you're still training.
Peace.

This is a great blog. Glad I stumble upon your site. Keep it up.

Impressive indeed. This is an eye opener on just how much room for improvement I have when working on my balance.

very nice challenge! i had the same one, but it was about 1,5 kilometres (but at first i was going to do 1 km only). During that challenge i openg for myself the same nitices, especially the one, which is about focuses, i was surprised a bit about it. the other interesting thing was a great wind during the challenge, and i'm glad that i didnt fall at all. I remember, i wrote a small post about the challenge.
when i finished it i had a thought about a 1,5 km balance challenge backwards))) how do you think about it, Chris?))

Nice to see your passion!
Well firstly i also had nearly a 1-2 mile run and now i am improving my stamina :)